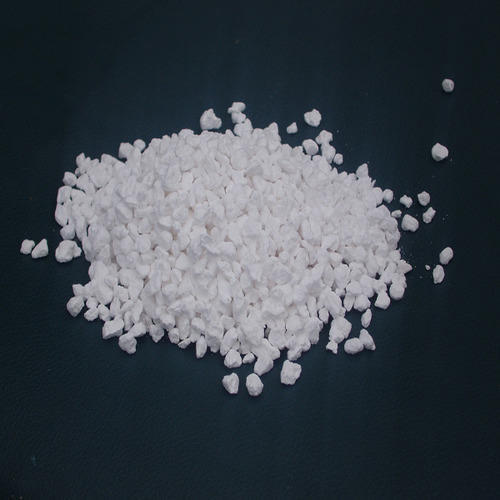 Calcium chloride is an exothermic substance that generates heat when combined with moisture. It attracts moisture from the air and causes a chemical reaction that results in a solution of water and salt called an "ice melting brine." This reaction takes place rapidly, releasing a large amount of heat. This process can be used in the melting of ice in cold climates.

Calcium chloride releases heat as it melts, and its this exothermic nature that increases its performance, making it more efficient than rock salt when used as an ice melter. In addition, it can perform at extremely cold temperatures. This property makes calcium chloride a superior deicing agent and significantly outperforms rock salt.

Why is calcium chloride more effective than traditional rock salt?

Calcium chloride is used in ice melting applications because it is relatively harmless to soil and plants. It is also more effective in colder temperatures than sodium chloride. The effectiveness is attributed primarily to its ability to melt and liquify at colder temperatures and prevent re-freezing once the brine is formed. These are both important factors to consider when picking an ice melt, specifically;

Compared to rock salt, calcium chloride is cheaper and less corrosive. It is also slightly more environmentally friendly. However, it is best applied a few hours before snow falls. This helps prevent the snow from sticking to the surface and prevents it from rolling away.

What about refreezing when temperatures drop?

We all know that ice melters can potentially damage or crack concrete among other surfaces when the cold weather goes through periods of thaw and refreeze. These weather cyclings can cause the dissolved liquid to seep into the cracks in the concrete, and fracture the pavement overnight when the water freezes again and expands.

One major advantage of calcium chloride, is that the ice melting brine has a much lower re-freezing temperature when compared to conventional ice melters. This means that calcium chloride is less likely to re-freeze at night, preventing any damage to the surface you apply it to.

Calcium chloride is an excellent deicer for use in cold climates. Its exothermic action causes a liquid brine that dissolves ice. This liquid melts the ice, and it is easy to clean up. In addition, it is safe for pets.

Safety of calcium chloride compared to other deicers

Calcium chloride is a specialty salt that is used for several different applications. It is an effective deicing agent that not only improves the safety of roads and pedestrians, but it also eliminates unhealthy dust particles in the air. Calcium chloride is the most commonly used deicer, accounting for the majority of the volume used annually. Its chemical reaction with water produces a mild exothermic reaction, which causes it to release heat as it dissolves.

However, calcium chloride has some disadvantages over sodium chloride. Foremost, when the brine mixture is formed during the ice melting process, the pH of the solution is increased. This may cause damage to vegetation and plant life, as highly alkaline conditions are not desirable.

Although calcium chloride is the most widely used deicer, it is expensive compared to other deicing agents. It can melt ice at a temperature as low as -25oF and is available in flake, liquid, and pellet form. Calcium chloride is hard on surfaces and can cause salt stains.

Pound for pound, calcium chloride makes for a much more effective deicer than any other salt on the market. The typical round form of the prill, is fast acting, and no need to use large quantities of the products makes it more economical for most situations.

The Winter months can be a challenging time for anyone.

Calcium chloride has the advantage of being able to dissolve ice faster. It changes the melting point of water and makes it difficult for ice to bond with the ground. In addition to being cheaper, calcium chloride is also more effective at melting ice at lower temperatures. It melts ice at temperatures of 15 to 20 degrees Fahrenheit.

Calcium chloride is a hygroscopic substance, meaning it attracts water molecules from the air and surrounding surface. Its ability to draw heat from the surrounding environment makes it a great choice for melting ice, especially in harsh winter conditions.

Don't hesitate to contact us at Eco Living Solutions should you have any questions, or inquiries about where to access our fast-acting calcium chloride ice melt, or need more information about our other deicers and de-icing products.