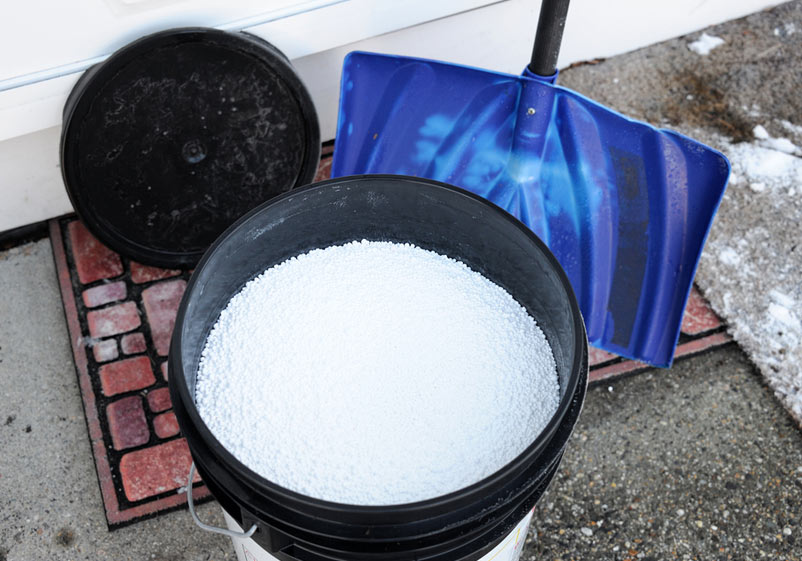 While ice melt can be helpful in freezing weather, it also has some drawbacks. For instance, it is not very effective when used in larger amounts, some ice melt products do not work in all winter weather, and some can be harmful to metal or chipped concrete surfaces. Therefore, you should aim to only apply a few pounds of ice melt per 500 square feet. Applying more than this amount wastes your time and money. Instead, you can use calcium chloride ice melt which works down to -25degF and does not require frequent reapplications. It also has the added benefit of being safer for concrete and non-treated metal surfaces.

When it comes to removing ice and snow from driveways, salt is often the first choice for homeowners. However, it can damage pavement and plant life, and is harmful to pets and children. In addition, it can irritate the skin and mouth, and even be toxic when ingested. Fortunately, there are many alternatives to rock salt.

Sand is one of the most common ice melt alternatives. It helps provide traction on slippery roads and surfaces, and is inexpensive to purchase. Sand is a great option because it's not permanent, and it's easy to remove, too. Another common alternative is brick sand, which is coarser than typical sand. You can find brick sand at any building supply store. Ash is another convenient alternative, which helps melt ice quickly in sunny weather. The biggest drawback of using any kind of sand is that it doesn't actually melt the ice, and doesn't lower the freezing point of the water - all it does is provide traction for slippery surfaces.

Fertilizer as an Ice Melt Alternative?

Another effective alternative is to use fertilizer. It is cheaper and can lower the melting point of ice without damaging the surface. It works best in low temperatures, but is not as effective in extreme weather. The only downside is that it has a limited melting time. If you want to try it, make sure you mix it well.

Other De Icers and Ice Melt

Using rock salt can damage masonry and concrete. Salt left on these surfaces can lead to cracking and separation, which can also affect roads. It also can harm animals and plants.

Chemical deicing agents are also increasing in availability. These agents are often more effective, work at lower temperatures, but may not be compatible with salt spreaders, and may require specialized equipment (spray bottle) to apply.

When it comes to ice melt, calcium chloride pellets are the best solution. These pellets lower the freezing point of water, making it effective in melting ice. However, it's important to use this product correctly or it could damage your driveway or lawn. Spread all de icers evenly so that it covers the entire surface area and prevents concentration in one spot.

Calcium chloride is more effective than rock salt at melting ice, because of its special melting properties. It lowers the freezing point of water, releasing heat in the process. This means it melts ice quicker than other materials. This is what makes it a better deicer than rock salt and other salts.

If you want to keep your driveway and sidewalks safe during freezing winter weather, calcium chloride is the best option. It works better than rock salt in terms of melting ice, and is more accessible to the public. Calcium chloride can be used in driveways, sidewalks, and even on concrete and asphalt. It melts water in lower concentrations, so you don't need to apply large amounts of it.

Because calcium chloride is highly soluble in water, it creates a fast-acting brine solution. This process melts ice and snow much faster than rock salt. It also helps clear larger areas than rock salt does. Furthermore, calcium chloride is an exothermic compound, which means that it releases heat when reacting with ice and snow. This added benefit means that the product will work under temperature where over ice melt products may fail. Search for a product that comes in a resealable bag or bucket, has a pellet shape rather than flake. Some home center retailerrs may even have same day delivery during winter months, as an added benefit when the weather is unpredictable.

If you have a driveway that gets cracks during the winter months, it might be a good idea to use Gypsum ice melt. This material will not only keep your driveway safe, but it will also help to improve water infiltration in the soil. It will also improve the drainage of your soil, which will help to prevent erosion. The best part about using Gypsum is that you don't need to apply it as frequently as rock salt. This product is safe to use in your driveway, patio, and even on your lawn.

Gypsum is a naturally occurring mineral made up of calcium and sulfate. It is often used in agriculture to help plants grow and is also used to make cement and plaster. In addition to its use in landscape, gypsum can be used as a soil amendment. It can be spread over a lawn or directly applied to plants.

Gypsum is often found in rock formations, which are interlayered with limestone and shale. It was formed millions of years ago when oceans were covered with salt water. When these waters became dried up, the inland "dead seas" became more salty, causing various compounds to form.

Although rock gypsum may look similar to rock salt, it does not have a salty taste. It is softer than rock salt and can easily be scratched with a fingernail. It has a whitish, mottled appearance and is microcrystalline in composition. It is similar to chalk, but is calcitic, meaning that it does not bubble or react with acid.

When mixed with sand, magnesium chloride has the capacity to prevent refreeze and overnight ice formation on your driveway. This is because magnesium chloride does not pull as much moisture from the air, leaving the surface less prone to dilution and making it less slippery. Magnesium chloride is also safe for pets, as the chemical is rather bitter, making pets less likely to lick it and accidentally ingest it.

Just like with other ice melt options, there may be many grades of magnesium chloride on the market. Looks for a product that has a working temperature of -25 deg Fahrenheit or less. As mentioned before, because magnesium chloride doesn't absorb as much water from the air as other ice melt products, so storage isn't as critical - but some forms may be challenging to scoop or apply.